For some reason, I go into Charles Dickens thinking I dislike him and it will be a chore. This is not logical because A Christmas Carol is my most read book (every year). I quite enjoyed A Tale of Two Cities, despite early confusion. I think the ill-conceived notion was born of the fact that as a child I despised the movie Oliver Twist, and due to vivid history lessons in year 4, the Dickensian era evoked images of children having their fingers hacked off in machinery, and bitter cold.

I am glad I overcame this aversion, as Great Expectations is certainly worth it’s place on the shelf. I wasn’t sure that I would enjoy it, knowing the ending. However, there was a lot I didn’t know, and so there were several plot twists that caught me by surprise. (This might be because the renditions I recall seeing consisted of the Gwyneth Paltrow film, a South Park episode satirising of the story, and accumulated general knowledge from goodness knows where). 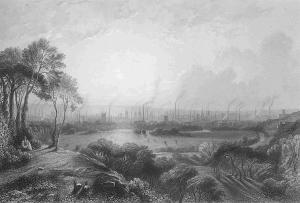 I love how multi-layered the characters are, and how they are allowed to stray from their original beliefs and behaviours in reaction to their experiences, like real people. I strongly disliked Pip, and thought him incredibly insolent, and was not convinced he  truely learned his lesson.

The scenery created in my mind was always terribly foggy (literal fog) and tinged with mossy green. While certain scenes were described this way, I think it was also quite symbolic of the mystery, and gradual emergence of truths throughout the novel. Overall, a good read, and I look forward to my next Dickens adventure.

A Tale of Two Cities

I must look like a blundering fool, as the majority of books I have reviewed, have befuddled me. Do not expect this review to be any different. I like a challenge.

I was glad to find another Dickens novel which matched my ancient copy of A Christmas Carol. Both are leather-bound, with gold embossing, which is very fitting for an author whose name has become an adjective. I also picked up Great Expectations and a Kipling novel in this series.

I had first attempted A Tale of Two Cities when I was 12. It didn’t work out well. This was attempt number two. I dislike emphatic repetition. Needles to say, the first page of this novel was painful. ‘It was the best of times, it was the worst of times’ is a very famous line. What they don’t tell you is the whole page goes on with juxtapositions to the point where I screamed, “I get it, it was a very confusing and conflicted time!” If I hadn’t been so frustrated, I might have been more prepared for the rest of the novel.

In an attempt to create and dark sense of mystery, Dickens bombarded me with a flurry of characters, innuendo and scenic changes. Spoiler alert: There are more than two.

A Tale of Two Cities

I try to avoid any educated critiques of books before I read them so I can have a genuine response to the words. However, after struggling through half this novel, I went to wikipedia to figure out what I had just read. The second half of the novel was much easier to follow. Having said that, I find Dickens’ style of prose enjoyable for the most part. Much like attending your first ballet, I would recommend having a skeleton idea of the plot before embarking on this venture. The story is fantastic, once you catch on. I can understand why this book is a classic and would recommend it.

I still stand by my position not to read analyses before commencing a book. My favourite quote captures this idea: “If everybody is thinking alike, then somebody isn’t thinking”, George S Patton.