On The Road, by Jack Kerouac, is infamous for causing a stir in the 1950s. It follows the philandering of a young man into the underground of America. I loved Catcher In The Rye and the in-depth insights it gave into the main character’s psyche, while he broke away from the expectations of his conservative society. On The Road doesn’t linger long enough to even express whether the narrator was happy or sad. It’s made up of one page events filled with a cacophony of interchangeable characters, each less developed and less memorable than the next. You don’t know their motivation for anything, only that they “go with it” and like to “dig” things. Now I am from a notoriously apathetic generation, but even I can’t relate to these layabouts; even the dullest adolescents have reasons for sitting around in car parks and lacking drive. There is no sense of the atmosphere of the American highway, or the cultural idiosyncrasies of the Hispanic neighborhoods. There’s little insight into the characters’ interaction with, or opinion of, the society in which they exist, beyond a superficial level. Kerouac’s language can only be described as jazz, in that it is unstructured, goes in all directions, runs on and on without form or adequate punctuation, jumps backwards and forwards with no reference point, uses unnecessarily obscure and inconsistent language – at times you need the Oxford dictionary, at others urbandictionary.com – and if you think this has been a long sentence and bulky paragraph, just wait until you read the book, because this collection of the meaningless gibberish drugged beatniks say goes on for 300 pages. I think there is a particular breed of Hipster that would enjoy this book, however, I did not.

When all you own is a hammer…

When all you own is a hammer, every problem starts looking like a nail. Abraham Maslow

After the floods I had some pine furniture which had become discoloured. I headed off to the local hardware, only to remember they were completely under, so I travelled another two suburbs over, same luck. How anyone was supposed to repair their houses without hardware, I’ll never know. After finally driving for 45 minutes, I found one which was operational. I stocked up on furniture oil, and sand paper.

My first experiment was with an old chest my mother had tried to throw out many times, for whatever reason. I open the lid, half of which promptly fell off. After precariously balancing it back on the nails, I sanded it down and applied the first coat. I resisted the urge to apply the second coat too soon, and followed the instructions on the tin by waiting 8 hours, giving it a light sand and then applying another thin coat. I was very pleased with the results and thought, ‘I have ¾ of a tin left, what else can I slap some oil on?’

I thought, ‘I’ll strip the paint off my pine chair and stain that’. Of course, it turned out this chair had been repainted numerous times and I’m still trying to get all the layers off. 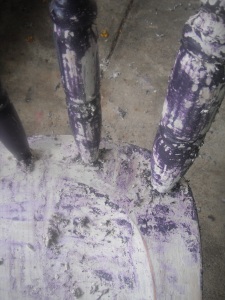 too many layers of paint

I decided to restore a wardrobe that was left by previous owners in out house. The surface of this wardrobe was covered in asbestos-flavoured veneer, which came off in such as fine mist that I regretted not having a face mask. I covered a broken front panel with some pretty fabric and lined the draws with vintage 1960s and 1970s wall paper. I felt it looked quite spiffy, and was a fraction of the cost and weight of an Ikea flat-pack. 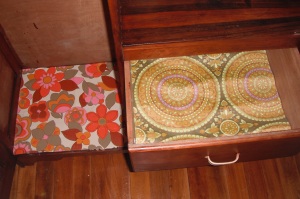 Hint: The idea of dousing paint thinner on yourself to clean off the oil sound too dangerous? Try some anti-dandruff shampoo.

Still a waterline but looks better

I had first used this 1957 Vintage Vogue pattern (V2903) to make a Queen of Hearts costume for my sister. I finally had the time and cash to attempt a more wearable version.

This pattern takes 6 metres of fabric, that is a lot, especially when you have a very small working space. I used a quilting fabric because of the beautiful design, which reminds me of Delftware plate motif.

Being quite short, I ended up using only around 5m, as I cut the length a foot shorter, even before hemming. If like me, you find cutting the pattern a most tiresome activity, ready your forearm muscles for this beast. It is 8 large, long pieces, plus facings. Nevertheless, it is really quite a simple sew.

One down side of this pattern is the sleeves, as I learnt first time around. They were designed for a Vogue model, and are only suitable for sitting at a dinner table or standing in front of the sink, no reaching or waving allowed (a lady in the 1950s probably wouldn’t engage in such uncouth behaviour). Needless to say, I left the sleeves off this incarnation. 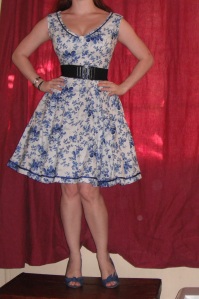 I added the embellishments of ribbon trim and a button as it is otherwise quite plain. I also wear a tutu/petticoat under-skirt underneath to fluff it out to a truer 1950s style. I didn’t iron in the pleats of this dress, because I quite like the looser flowing feel.

All things considered, I would use this pattern again.

My first attempt on this Vintage Vogue pattern ended up looking something like a pasty blue pillow case. The second incarnation was far more successful. Granted I didn’t add the collar, disregarded the skirt pattern, and raised the waistline about 4 inches, but an axe with three new blades and 5 new handles is still the same axe.

I had to stitch and restitch the skirt three times because I wasn’t using the recommended fabric. My second attempt included some tulle to support a full skirt. It wasn’t so much a throwback to On the Town as it was bulbous and unflattering. I pulled out the tulle to allow the gathered cotton to fall more naturally. The gathering was, however, too dense for the light fabric, so there was little improvement. Normally I would have given up, but the fabric was just too beautiful to turn into another pot holder.

After my fourth attempt the skirt sat flat with just two pleats at the front and some tapering down the back. It was as much a pencil skirt as my hips would allow. After two insertions of the zipper and restitching darts 5 times, the end result is something reminiscent of an Elvis Presley Hawaii movie circa 1962.  This is actually kind of great being I am recently in possession of several of these gems.

Pay attention to where the waistlines are designed to sit

Making items bigger with the assumption you can always take it in, can make things worse